Take a glance at Zac Efron’s diverse hairstyles over the years. See how the gorgeous singer-actor played with different variations that looked astoundingly trendy and edgy.

Zac Efron is an American actor and singer. His charming look and style have made many women fall for him. You will be surprised to learn how many hairstyles he has changed over the years. We will give you a sneak peek of his great looks so far.

The short straight casual look is a safe hairstyle for men and Zac Efron has been seen in this style many times. He has created variations in this simple style by having some jagged cuts at the top or spiking it up. Sometimes, he has spiked it all up and added some shades to the hair. It gave him an edgy look. Shorter hairstyles also look good on him. Clipper cut short hair, cut close to the head made him look younger.

In most of his hairstyles, he went for the jagged cut in the middle. He changed his hair color to black, chocolate, and even gray. In the jagged haircut, the blend is very important and Efron manages to do that very well. Highlights look great on him as well. One of his best hairstyles was the wispy cut layers. The top layers of hair were swept to the side. It created an edgy look. In an event, he was seen in medium straight hair look swept at the side. So, far, we haven’t seen him in any unconventional hairstyle. His hairstyles are liked by the younger generation.

Zac Efron is a multi-talented personality. He is an actor and also a singer. He got great support from his family from a very young age for acting. When he was in school, he took part in schools’ plays and even took singing lessons. He performed in shows like Peter Pan, Gypsy, Little Shop of Horrors, etc. His drama teacher recommended him to an agent and from there, his acting career started. He acted in various television series including ER and The Guardian.

For working in the television film ‘Miracle Run’ he received a nomination for The Young Artist Award. He became popular after acting in the film ‘High School Musical’ in 2006. He worked in comedy films ‘Hairspray’ and ’17 Again’. He later worked for the sequels of ‘High School Musical’ as well. His film ‘Me and Olson Welles’ received lots of positive reviews at the Toronto International Film Festival. He gave voice to the animation film ‘Lorax’. His recent movies include ‘Dirty Grandpa’, ‘Baywatch’, ‘The Greatest Showman’, etc.

He won the Teen Choice Award for ‘High School Musical’. He won a number of awards for ‘Hairspray’ including MTV Movie Award. He received many awards for the other sequels of High School Musical and other films as well. There are not many artists out there who have received so many awards within such a short career. He is a very promising actor and we can expect great works from him.

Here are Zac Efron’s hairstyles over the years.

Zac Efron rocked a pompadour hairstyle with short sides nicely transitioned to his medium-length goatee at the premiere of Extremely Wicked, Shockingly Evil and Vile movie held on May 2, 2019.

Actor Zac Efron pulled off a fade haircut styled with frontal spikes during “The Beach Bum” Premiere at the ArcLight Hollywood on March 28, 2019.

The actor styled his platinum blond hair with a pompadour undercut during the “Extremely Wicked, Shockingly Evil And Vile” premiere at the Curzon Mayfair, London on April 24, 2019.

Zac Efron arrived at the premiere of Baywatch: The Movie in Miami Florida on May 13, 2017, sporting a hairdo that resembles Elvis Presley’s rockabilly look.

The actor sporting a regular crew cut during the 2017 MTV Movie & TV Awards at the Shrine Auditorium on May 7, 2017. 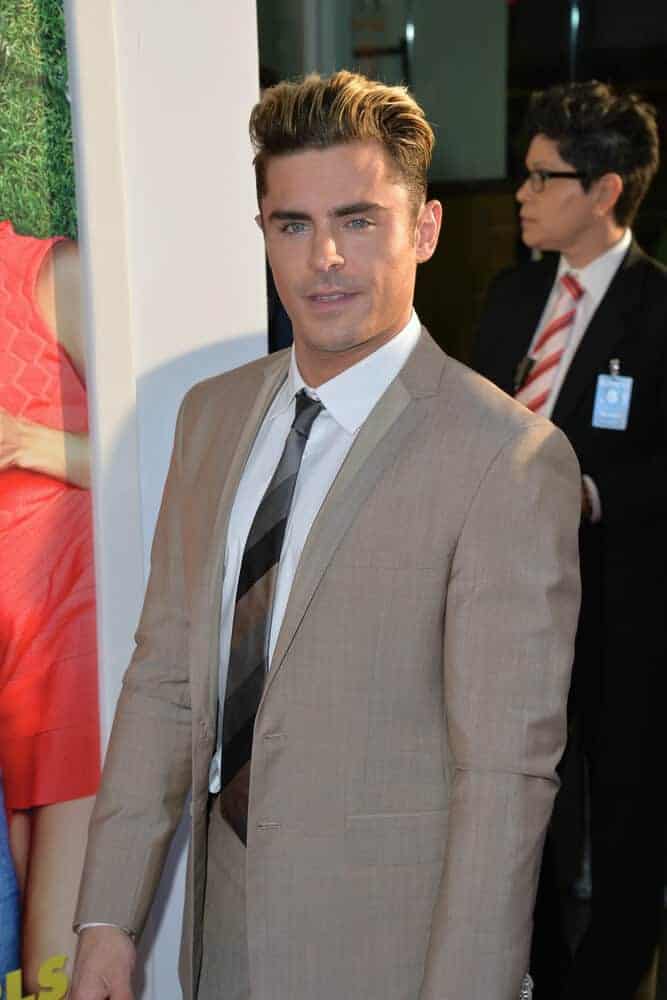 The actor showcased his pompadour hairstyle in golden blond during the movie premiere of “Mike and Dave Need Wedding Dates” held at the Cinerama Dome, Hollywood on June 29, 2016. 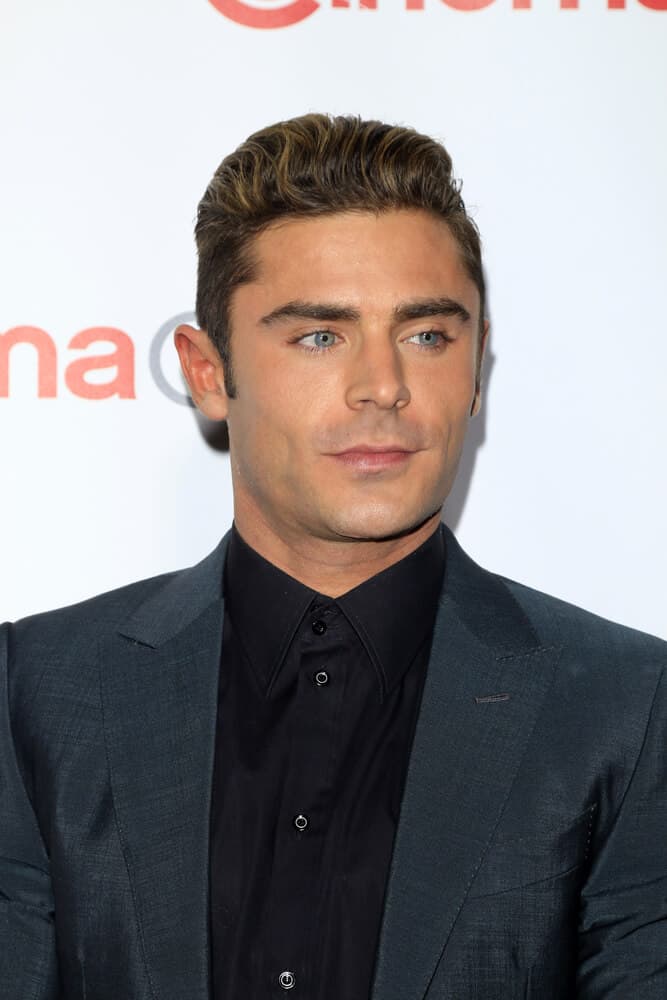 Zac Efron at the CinemaCon Awards Gala at the Caesars Palace on April 14, 2016, sporting his regular crew cut styled with highlighted brushed up hairdo.

On August 20, 2015, the actor attended the Los Angeles premiere of his movie “We Are Your Friends” in a stylish navy blue suit paired with textured brunette spikes.

The actor was spotted at the BBC Radio One Studios at Broadcasting House on Aug 11, 2015, wearing a green plaid polo shirt along with a brushed up hairstyle.

Zac Efron sported a boyband hairdo with short spiky hair during the 2014 MTV Movie Awards at the Nokia Theatre LA Live on April 13, 2014.

Zac Efron paired his classic black suit with brushed up spikes during the “That Awkward Moment” LA Premiere at Regal 14 Theaters on January 27, 2014.

Zac Efron looked fresh and younger on a crew cut with subtle fade and spikes at the Venice Film Festival on August 31, 2012, in Venice, Italy. 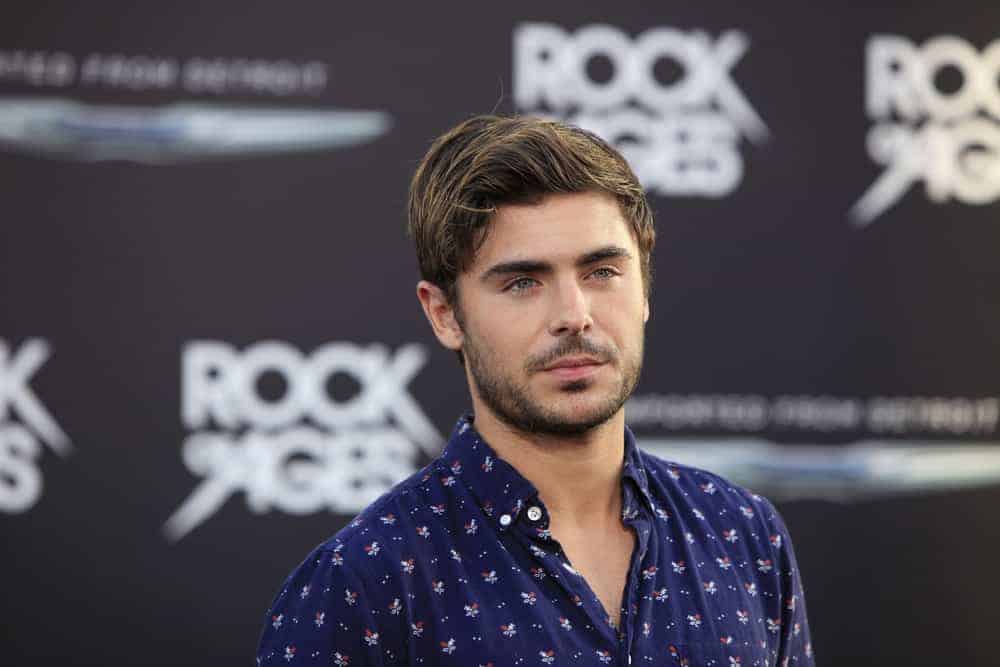 The actor looked romantic in his short hairdo with swept up quiff during the “Rock of Ages” premiere at the Grauman’s Chinese Theater in  LA on June 8, 2012.

Zac Efron looked dashing with a brushed up frontal at the photocall for his movie “The Paperboy” during the 65th Festival de Cannes on May 24, 2012. 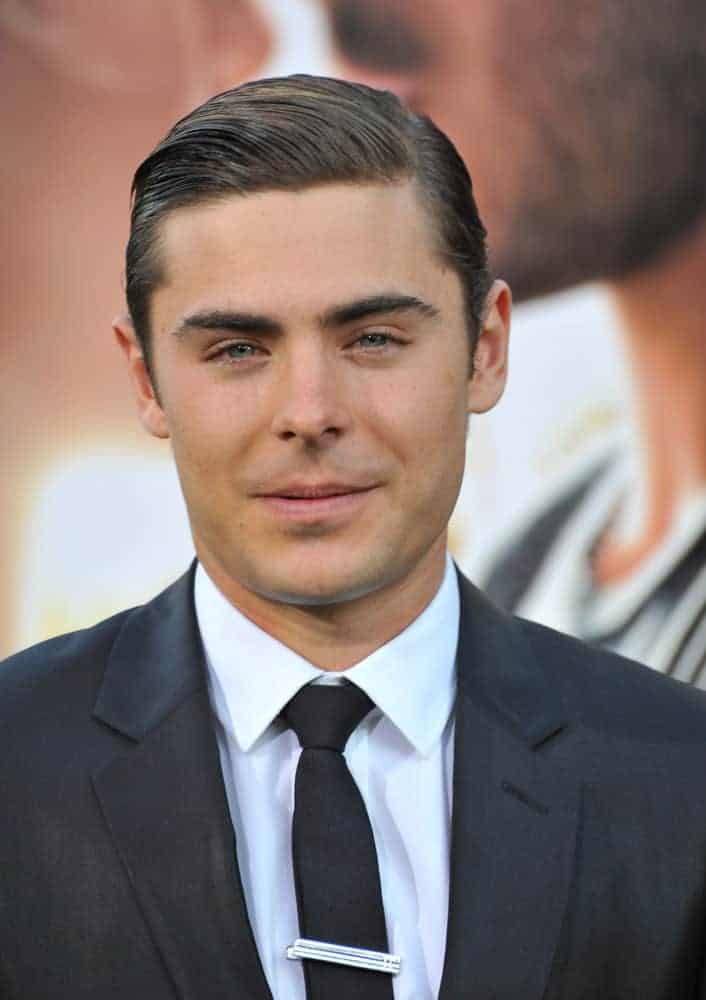 Zac Efron glammed up with a slick, side-swept look at the world premiere of his movie “The Lucky One” on April 16, 2012.

The actor unleashed his edgy side with a grunge hairstyle at the world premiere of his animated movie “Dr. Suess’ The Lorax” at Universal Studios, Hollywood held on February 19, 2012. 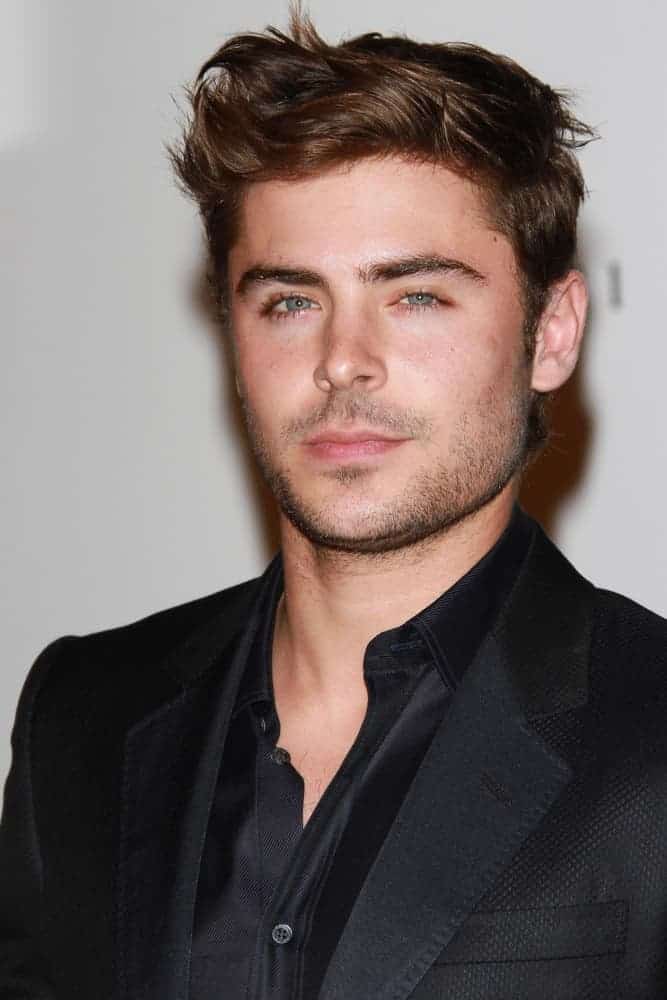 Zac Efron oozes with masculine appeal with his buzz cut ‘do at the 12th Annual WB-In Style Golden Globe After Party on January 16, 2011 in Beverly Hills CA.

The actor exhibited his stylish wavy hairstyle with a messy touch at the world premiere of his new movie “Charlie St. Cloud” held on July 20, 2010.

The actor steals every young girl’s heart with his messy side-swept hairstyle during the 2009 Teen Choice Awards held on August 9, 2009.

Zac Efron flashed a sweet smile with his long tousled locks styled with side-swept bangs at the 2009 MTV Movie Awards held on May 31, 2009. He wore a gray suit paired with a black striped tie.

Zac Efron suits up looking impeccable with his slicked back gelled look at the 81st Academy Awards on February 22, 2009, in Los Angeles.

The actor looked suave with slick, side-swept hairstyle during the Los Angeles Premiere of ‘High School Musical 3: Senior Year’ held at the Galen Center in Los Angeles, USA on October 16, 2008. 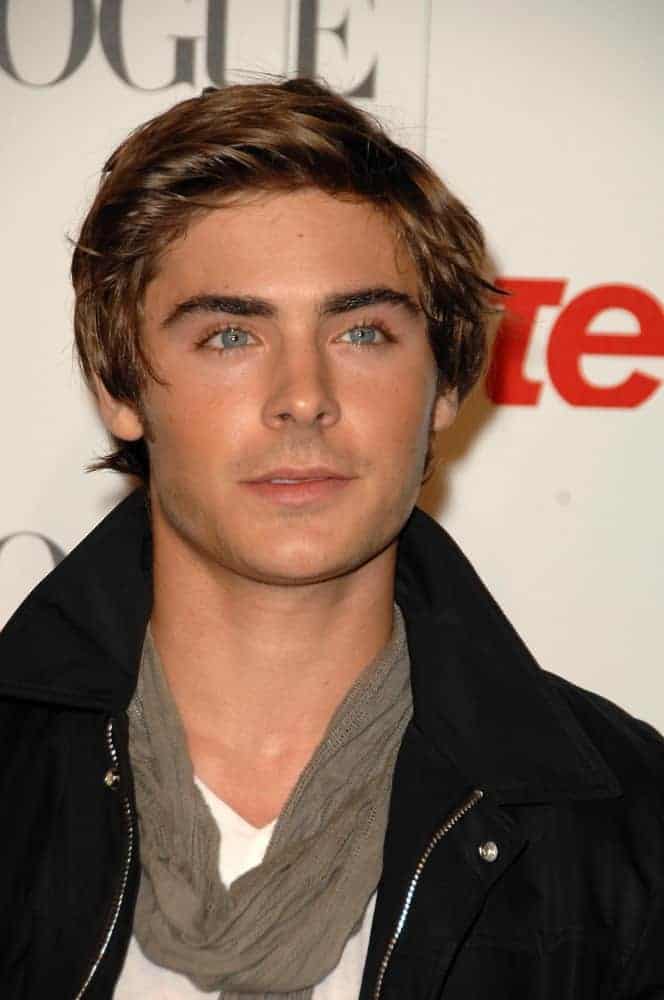 Zac Efron showed up in a stylishly disheveled hairstyle at the Teen Vogue Young Hollywood Party on September 18, 2008. He completed the look with a black jacket and gray scarf.

Zac Efron showed up with his signature look at the DVD release premiere of “High School Musical 2: Extended Edition” on November 19, 2007.

Zac Efron charmed his way through with tousled shaggy hair during the “High School Musical 2” premiere in California on Aug 14, 2007.

The actor attended the premiere of his movie “Hairspray” on July 10, 2007, sporting a short haircut with side-swept bangs and acicular texture.

Zac Efron made an appearance at the 2006 Creative Arts Emmy Awards at the Shrine Auditorium, Los Angeles held on August 19th. He had a bowl cut with his fringe arranged in a cool side-swept.

The young actor with his shaggy hairdo at the 6th annual Family Television Awards on December 1, 2004, in Los Angeles, California.

Young Zac Efron oozes with cuteness in his bowl-cut hairdo during the “Thunderbirds” Premiere held at the Universal Studios Cinemas in Universal City, California United States on July 24, 2004.