Explore our collection of Taylor Swift’s glamorous hairstyles over the years. Witness how the sweet singer-songwriter played drastically with her silky blonde locks and bangs that are complemented with her edgy and trendy fashion style.

Taylor Swift is someone who likes to get a different look every time she appears in an event or function. She has experimented with different hairstyles over the years. Curls look like one of her favorites. She usually appears in bleach blonde curls. She seems to be a fan of fringes. We have seen her in long curls to bob styles as well. In 2016, she changed her hair color to a darker shade and did blunt bangs in front. She looked bold and strong.

In the 2016 Grammy Awards, she was seen in a bob cut with a full fringe style. Her side-sweep bob hairstyle at the premiere of The Giver certainly made people talking about her hairstyle. Her updo styles, like the pinned back style with blunt bangs in front, also suits are very well and gives her a graceful look. In 2013’s Radio 1’s Teen Awards, she certainly stole the show with her princess style hair.

The big waves were really appreciated by fashion lovers. Any hairstyle just goes very easily with Taylor Swift. Even a simple ponytail makes her look so beautiful and attractive. Her choice of hairstyle is something that inspires many people.

Taylor Swift is a famous American singer and songwriter. She has written many songs about her personal life and that’s something that made her popular. At a very young age, she was all set to become a country singer. She started taking vocal lessons at the age of nine. She got inspired by Shania Twain and started focusing on country music. She started performing at local events. She signed with the Sony/ATV music publishing house at a very young age.

Her album ‘1989’ was a huge success and she received three Grammy awards for it. Her concert tour for the album 1989 was also very successful. She is not just a great singer, but also an outstanding songwriter. She has received awards from the Songwriters Hall of Fame and Nashville Songwriters Association. She is one of the greatest music artists of all time.

Swift Taylor is a philanthropist. She has helped others on various occasions and believes it to be one of her objectives in life. In 2008, she donated one million dollars to the Iowa flood victims with the help of the Red Cross. She also donated a large amount of money for the refurbishment of a high school.

She has donated to several charities including Elton John AIDS Foundation, Feeding America, etc. She is the kind of girl everyone would like to be friends with. This talented singer has inspired many young people through her songs, fashion statements, and charitable works.

Here are Taylor Swift’s hairstyles over the years.

Taylor Swift had a stylish low bun incorporated with side tendrils and fringe at the premiere of “Cats” at Alice Tully Hall on December 16, 2019.

The singer-songwriter gathered her blonde hair in a slick upstyle with eye-skimming bangs and tendrils at the 2019 Billboard Women In Music held at the Hollywood Palladium on December 12th.

Taylor Swift attended the MTV Video Music Awards at the Prudential Center on August 26, 2019, in an edgy outfit paired with her beach waves and full fringe.

Taylor Swift tied her shoulder-length hair in a half updo with bangs at the 2019 Teen Choice Awards on August 11th in Hermosa Beach, CA.

The singer-songwriter wore a lilac ruffle dress during the 2019 Billboard Music Awards held on May 1st.  It is matched well with a classy updo featuring an eye-skimming fringe and cute side braids.

On March 14, 2019, the singer-songwriter arrived for the iHeart Radio Music Awards at the Microsoft Theater sporting her trendy outfit along with a ponytail and bangs.

Taylor Swift shines in a silver turtleneck dress paired with a messy upstyle and bangs at the 2018 American Music Awards held at the Microsoft Theater on October 9th.

Taylor Swift was seen in New York City on July 28, 2018 rocking a casual ponytail with bangs. It was complemented with black shades along with a denim top and distressed shorts.

The singer-songwriter was spotted on July 22, 2018, in New York City sporting a loose wavy hairstyle paired with her signature fringe.

Taylor Swift was seen wearing a pink jacket and denim shorts on July 21, 2018, in New York City. The look was completed with her mid-length waves and eye-skimming bangs.

Taylor Swift was wearing a side braided ponytail with bangs when she was spotted in New York City last July 20, 2018.

Taylor Swift twisted and pinned her blonde hair into a messy yet classy updo during the 2018 Billboards Music Awards at the MGM Grand Arena held on May 20th.

Taylor Swift paired her orange tube top with a bob cut hair in French style with full bangs at the 58th Grammy Awards 2016.

Taylor Swift rocked a frizzy bob cut hairstyle that’s perfect for her futuristic themed outfit. This look was worn at the Metropolitan Museum of Art Costume Institute Gala on May 2, 2016. 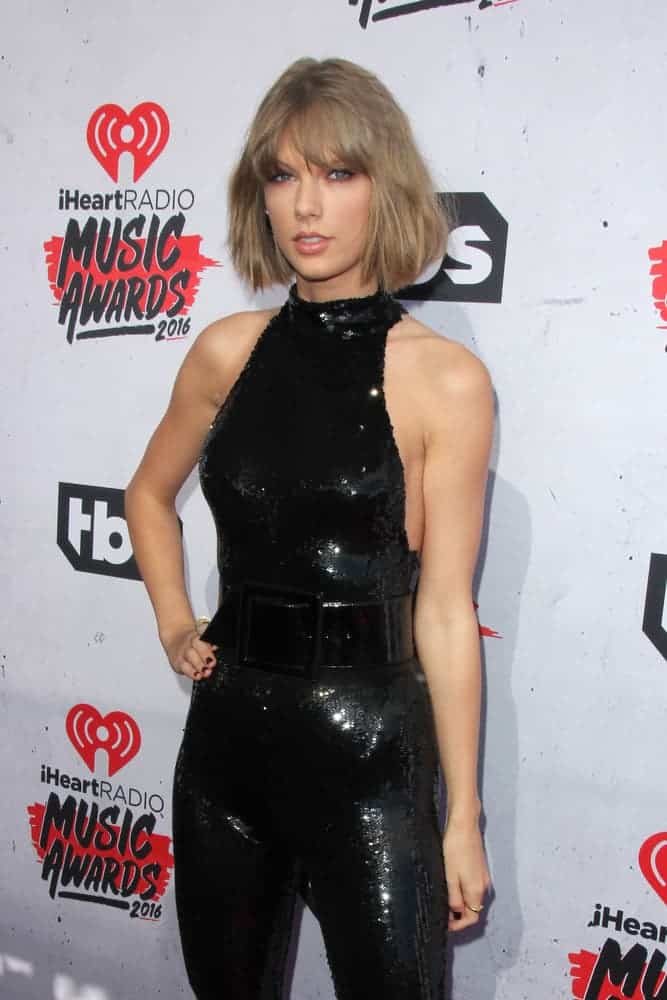 Taylor Swift attended the iHeartRadio Music Awards 2016 held at The Forum on April 3, 2016. She wore a tousled bob cut with full-bangs making her look very chic and sexy along with her black sequined jumpsuit.

Taylor Swift looked seductive in a white jumpsuit along with a frizzy mid-length bob incorporated with fringe. This was taken at the 2015 Billboard Music Awards.

Taylor Swift looking all cool and trendy in her mid-rib outfit at the 2015 MTV Video Music Awards. She complimented it with a low ponytail bun and side-swept bangs.

Taylor Swift looked very chic in her straight blonde hair with side-bangs at the Grammy Awards 2015. It perfectly fits her blue-green Elie Saab dress along with matching earrings. 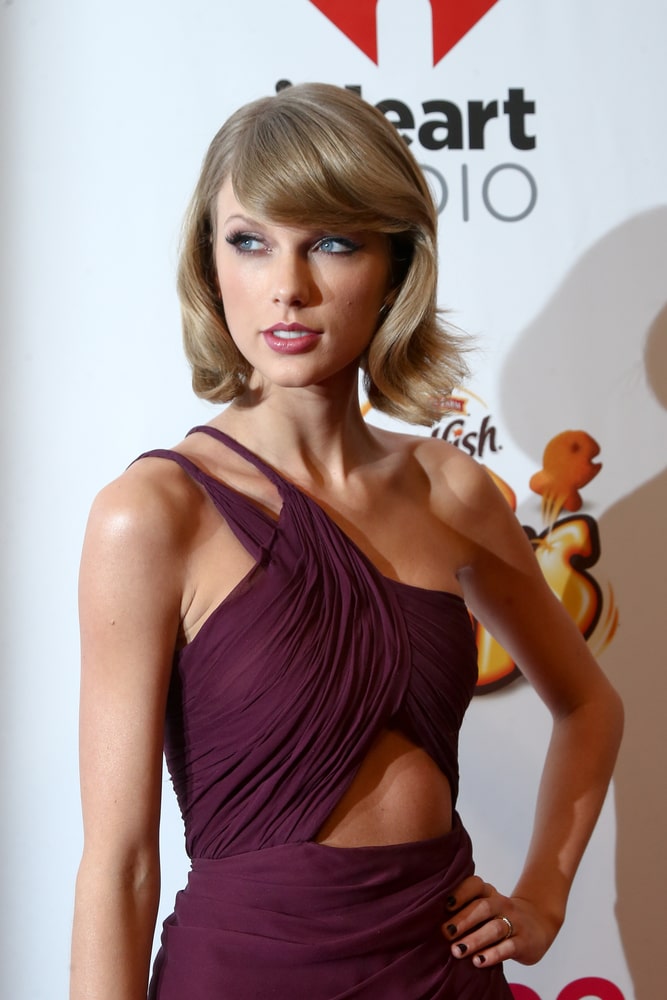 The singer-songwriter exhibited a sexy aura with her burgundy dress paired with a wavy bob cut and side-swept bangs during the Z100’s Jingle Ball 2014 at Madison Square Garden on December 12th.

The singer-songwriter looked sophisticated in a neat updo combined with a thin halo braid and bangs. This look was worn at the 2013 Grammy Awards held on February 13th. 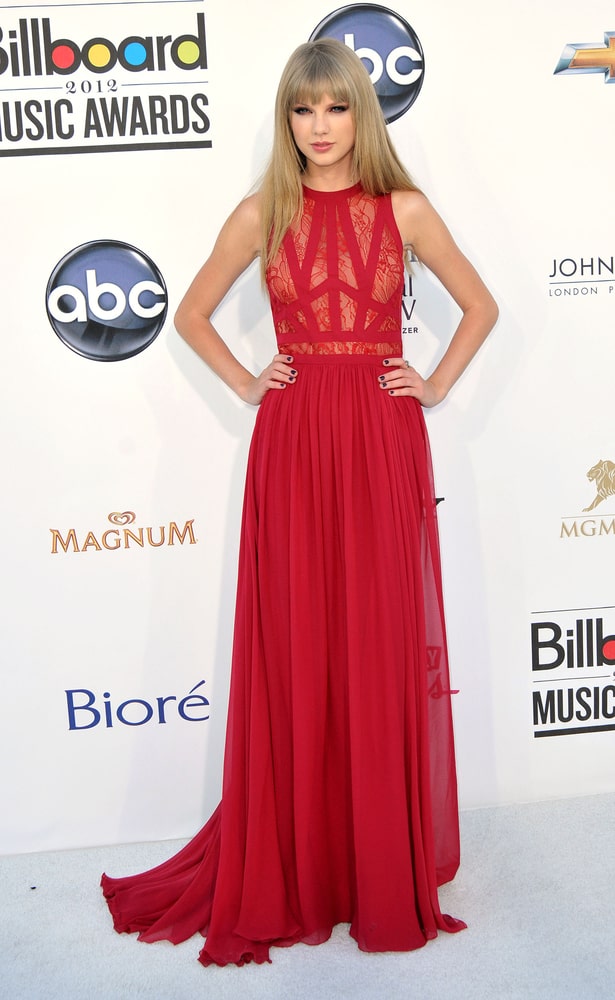 The singer-songwriter paired her flowy red dress with a simple straight hairstyle and bangs at the 2012 Billboard Music Awards held on May 20th. 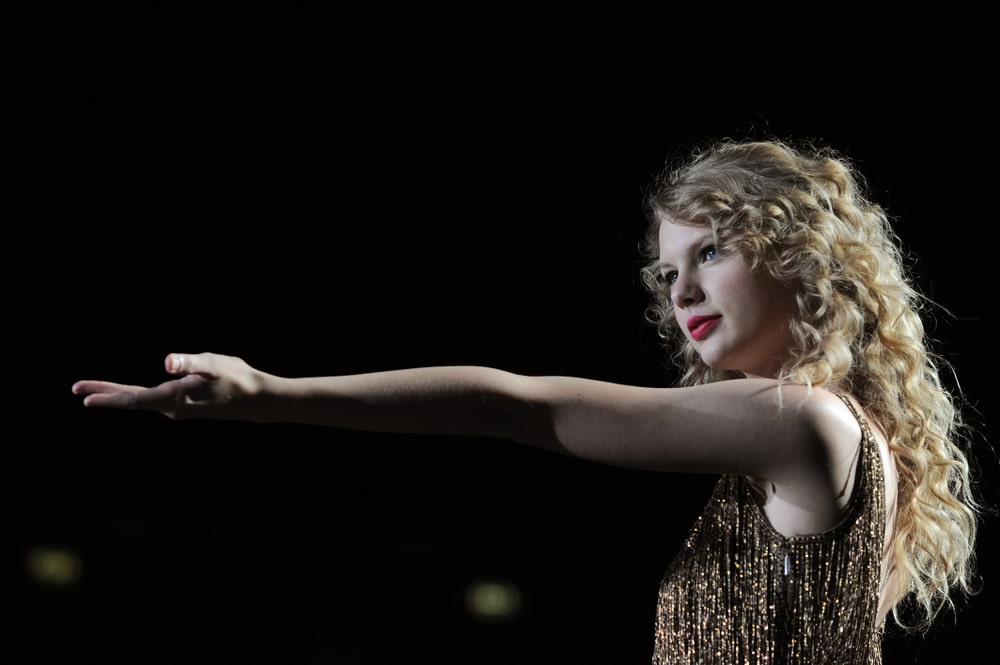 Taylor Swift during her live concert at Forum Assago on March 15, 2011, rocking a long curly hairstyle paired with a sparkling dress. 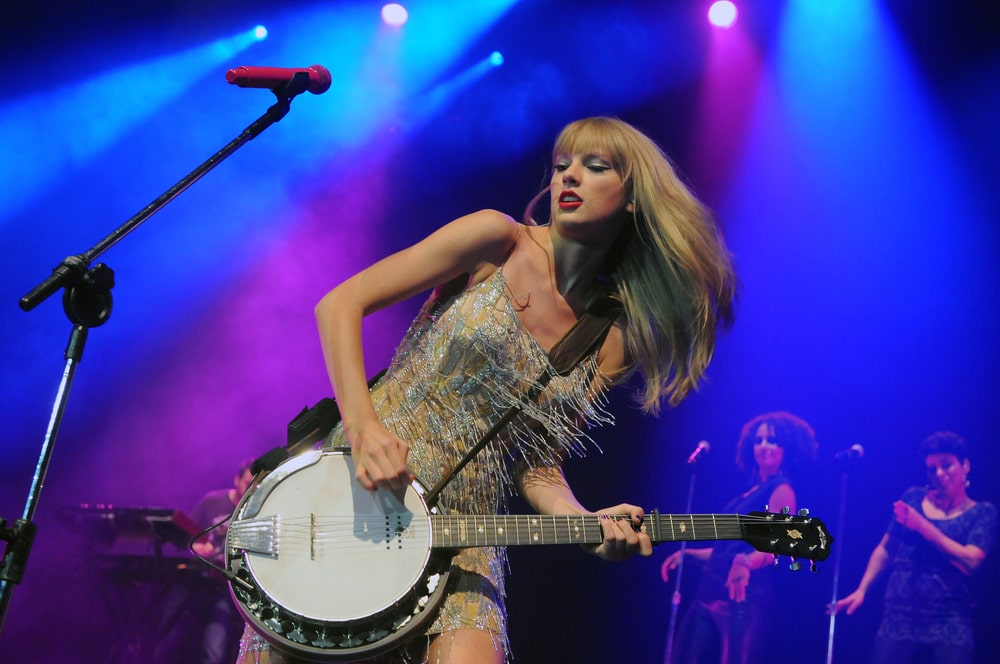 The singer performing at the HSBC Arena in Rio de Janeiro, Brazil on December 8, 2009, sporting a simple loose hairstyle incorporated with her iconic bangs.