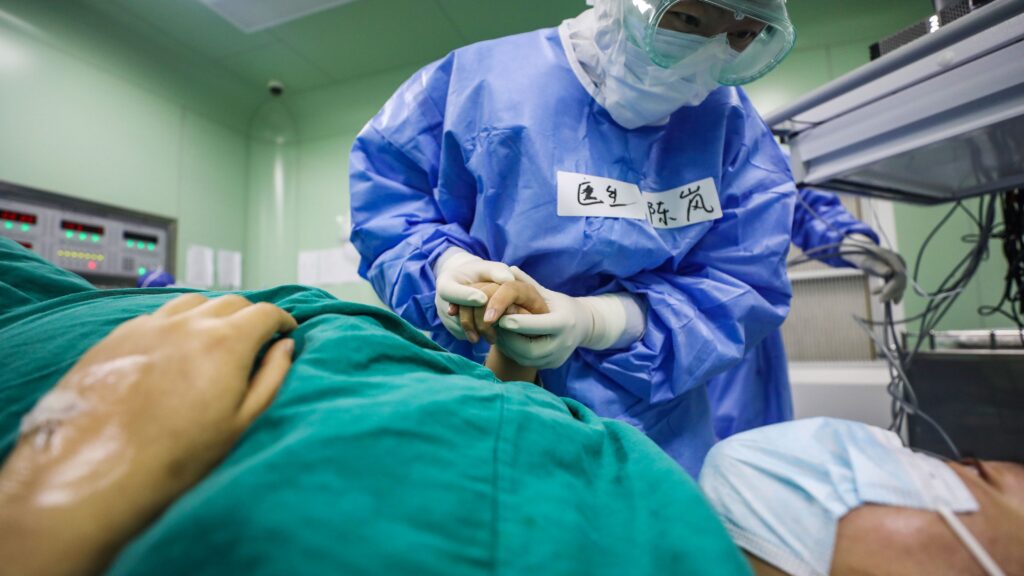 A trio of scientific reports about Covid-19 infections in pregnant women raises concerns that the new coronavirus may be able to infect a fetus in the womb.

It remains unclear if that actually happens, how often it does if that’s the case, and what if any risk it poses to fetuses. And an editorial in the journal in which two of the reports were published cautioned against putting too much weight on the findings yet.

“Is it possible that SARS-CoV-2 can be transmitted in utero? Yes, especially because virus nucleic acid has been detected in blood samples” from newborns, David Kimberlin and Sergio Stagno of the University of Alabama at Birmingham wrote. “Is it also possible that these results are erroneous? Absolutely.”

“Although these two studies deserve careful evaluation, more definitive evidence is needed before the provocative findings they report can be used to counsel pregnant women that their fetuses are at risk from congenital infection with SARS-CoV-2.”

The reports were based on only a small number of cases in China in which newborns were confirmed to have been infected. But any evidence of fetal infections would present yet another alarming facet of the coronavirus, known as SARS-CoV-2.

Two of the papers, published Thursday in the Journal of the American Medical Association reported finding a type of antibody to Covid-19 in newborns that is not typically passed across the placenta from mother to fetus.

The third, published in a sister publication, JAMA Pediatrics, found that three of 33 babies born to women in China who had Covid19 were infected. The babies, however, were not tested until two days after birth, making it possible that the infections did not happen inside the womb.

All of the infants in the reports survived.

Sonja Rasmussen, an expert on infections in pregnancy, said the reports suggest the possibility of “vertical transmission,” the term for transmission of a pathogen from a pregnant woman to her fetus in the womb or to a newborn during birth.

“I do think all these pieces taken together would lead you towards saying that it looks like vertical transmission is possible,” said Rasmussen, a pediatrician and a professor at the University of Florida. They “suggest to me that the virus can cross the placenta.”

There has been little data to date on what the virus does to pregnant women and their offspring. The limited reports published so far has been mainly reassuring.

In early March, the journal The Lancet published a report of nine women in Wuhan, the Chinese city where the virus emerged, who tested positive for Covid-19 during their third trimesters. None of the women had severe infections. All gave birth by caesarean section to healthy babies, none of whom seemed to be infected with the new coronavirus. That study also reported that testing did not find the virus in amniotic fluid, cord blood, and breast milk samples collected from six patients.

In the report in JAMA Pediatrics, doctors in Wuhan, reported that three babies born to women who had Covid-19 tested positive for the diseases. The three were among a group of 33 babies born in the hospital to women who were infected.

All three babies had some symptoms — lethargy, shortness of breath, fever. One had signs of pneumonia on a chest scan. But all recovered quickly and by day 6 or 7 tested negative for the virus.

“In all three babies that tested positive for the coronavirus SARS-CoV-2 in this study the sample was taken on day 2. This means that we are unable to tell from this study whether these babies were born with the virus [caught it in the womb] or were infected with the virus around the time of birth,” Chris Gale, a doctor of neonatal medicine at Imperial College London, said in a statement.

But two other groups of doctors from Wuhan reported finding IgM antibodies in a total of three newborns whose mothers were infected with Covid-19.

IgM antibodies are the first that develop when the immune system is exposed to a pathogen. And while some antibodies cross the placebo — meaning fetuses acquire some from their mothers in the uterus — IgM antibodies typically do not.

“IgM, which was detected in two infants, is not usually transferred from mother to fetus because of its larger macromolecular structure,” the authors, from Zhongnan Hospital of Wuhan University, wrote.

“Although infection at delivery cannot be ruled out, IgM antibodies usually do not appear until three to seven days after infection, and the elevated IgM in the neonate was evident in a blood sample drawn 2 hours after birth,” wrote doctors from Renmin Hospital of Wuhan University.

Rasmussen concurred. “If you see IgM against a specific infection in a baby’s blood it’s strong evidence of congenital infection,” she said.

To date, infections among babies and children have been mild. Rasmussen, however, noted one study of more than 2,000 infected children found some severe infections, mainly among very young children. One of the patients in that study, a 10-month old, died. The baby is the youngest person known to have died from the disease.

“That is the information we have so far, that most kids seem to do pretty well from Covid,” she said.